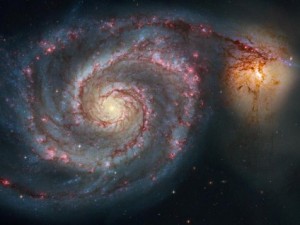 A superstar stellar celebrity
has appeared in the evening sky. Among
the worldwide observing community,
no one ever saw a starburst this young.
The inner clockwork of this titanic
event, was ranked as a universal
episode of intensity. Cosmic
explosions were seen by professional
digital astroimagers. They prepared
very large aperture telescopes,
then witnessed what the precursor star dared
to do before bursting. Everyone hopes
to glimpse the event with reinforced eyes:
that brilliant whirlpool that lives in dark skies.

This is a hubble space telescope picture. It’s just gorgeous.