Logo of the Center for NanoScience was “written” by pushing around
atoms of Gold [PTCDA = Au(11) using a nanomanipulator.”]

Atomic beach balls tossed beyond the bumps
of solid golden strips will now design
a strange imaginary landscape. Clumps
of particles appear to now entwine.
Electrons guided with some magic wands
create a message to my covered eyes.
These nanonistic, small molec’lar bonds
reveal to me all earthly matter ties.
I track and hover through the quarks of chance
enthralled by how our measurements can rule
the future of all technical advance;
A strange discovery: a student’s tool.
By thought and reason great ones had their turn.
now, with my hands, some new things I shall learn.

I wrote this one in 1993 after attending an IEEE convention in Seattle and learning about the Nanomanipulator. Warren Robinet was speaking and he said, “Imagine atoms the size of beach balls…” He was referring to a futuristic version of the nanomanipulator, where a virtual image of atoms (like a hologram) would be in the air, right in front of your face. You would have the capability of moving atoms around, like moving beach balls in the air. But that would not be a dream. That would not be a game. It would be a virtual interface to a nanomanipulator, and you would really be moving around atoms within the scanning tunneling microscope. He discussed how in the future, this could be a pedagogical method of teaching chemistry. That is, the students would learn molecular structure by actually moving around the virtual atoms and creating molecules.

His presentation was very stimulating, so I wrote this sonnet. I sent to him, and he sent it to the lab. They posted the sonnet on the bulletin board in their lab, and then Russell M. Taylor  published the sonnet in the appendix of “The nanomanipulator: a virtual-reality interface for a scanning tunneling microscope.”  http://www.warrenrobinett.com/nano/index.html

A great link to get an idea of how a nanomanipulator moves atoms around would be http://www.youtube.com/watch?v=4W7lcYoBA98 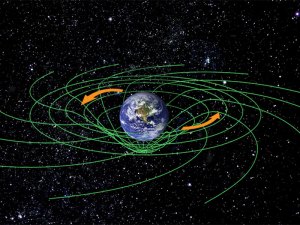 Newton thought space and time were absolute
then Einstein discussed relativity.
It was easy to prove an attribute
of an attractive force: captivity
of bodies, was not new. Now imagine
a planet immersed in honey: as it
rotates, it swirls and pulls with an action
much like spinning space time. In an orbit
around the earth, four precise gyroscopes
measure this effect. Quantized current flows
until it detects magnetic stream slopes
differential. A spin-axis opposes
new directions. The strength of gravity
can’t match the speed of light’s velocity.

This sonnet is about gravity Probe B (GP-B), a mission sponsored by NASA aimed to prove the effects of Albert Einstein’s 1916 general theory of relativity.

Rather than quoting them verbatim, you can read more about this project on:

The Space Station’s golden solar arrays
squeeze out the last morsel of energy
from each orbit. An instrument surveys
all dosages of power at every
diurnal spin as they revolve around
the planet. Large measures of power will
be sucked into the batteries. Compound
silicon solar cells dominate. Still,
it is the rotary joint that lets
the panels track the sun and seize
the rays. ISS spins until it sets
into shadow. It performs this with ease
just like a geometry, zipping all through
limited plasma fields of cobalt blue.