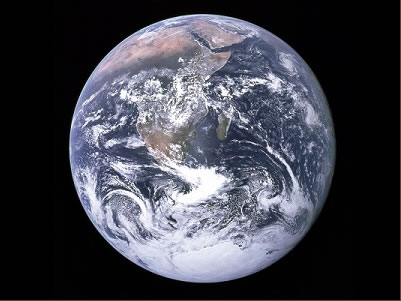 Earth As Taken by Apollo 17

The Earth As Seen From Apollo 17

Clouds weave quick patterns like silken white lace;
No borders are drawn on lands seen from space.
Such beautiful seas, and bounteous lands;
The oceans, the rivers, the snows and sands;
I have searched the universe high and low
Yet cannot detect such a well made show.
It’s hard to define Earth’s magnificent life:
The glory, happiness, sorrow and strife.
It’s pitify man does not fully know
The glory of life: to produce and grow.
Earth’s life’s a marvel, I clearly can see.
I daren’t imagine how no life would be.
Out in the heavens I see my Earth fly
Like a blue-snowy crystal, on black-velvet sky.

This is the first Sonnet I ever wrote, back in 1972. It is not even a Shakespearean Sonnet. I wrote it while Apollo 17 was returning from the moon to Earth. Jack Schmidt said that he had wished he were a poet so he could write about how beautiful the Earth is. I wrote this sonnet and sent it to him. He must have really liked it because he sent me back a letter thanking me for the poem. Also, 20 years later, I wrote to him again and reminded him that I was the one who sent that poem, and he seemed to remember the poem.

Most of you know the picture above. But some probably don’t know that this is the first full picture of the Earth taken by man. I was lucky enough to meet Gene Cernan in Seattle, back in 2000. I asked him who took the picture, and he said he didn’t know. He said they had one camera, and they all took pictures whenever they saw fit. No one knows exactly who snapped that picture. That’s why, whenever you see the picture, it is credited to the entire crew of Apollo 17.

Here’s a great picture of the crew . The magnificent Saturn V rocket is in the background, and the Lunar Rover is in the foreground. Amazing engineering for the sixties. It’s the technology that got us where we are today.

Poetry Picnic Week 14: What I’m Thankful for in My Life